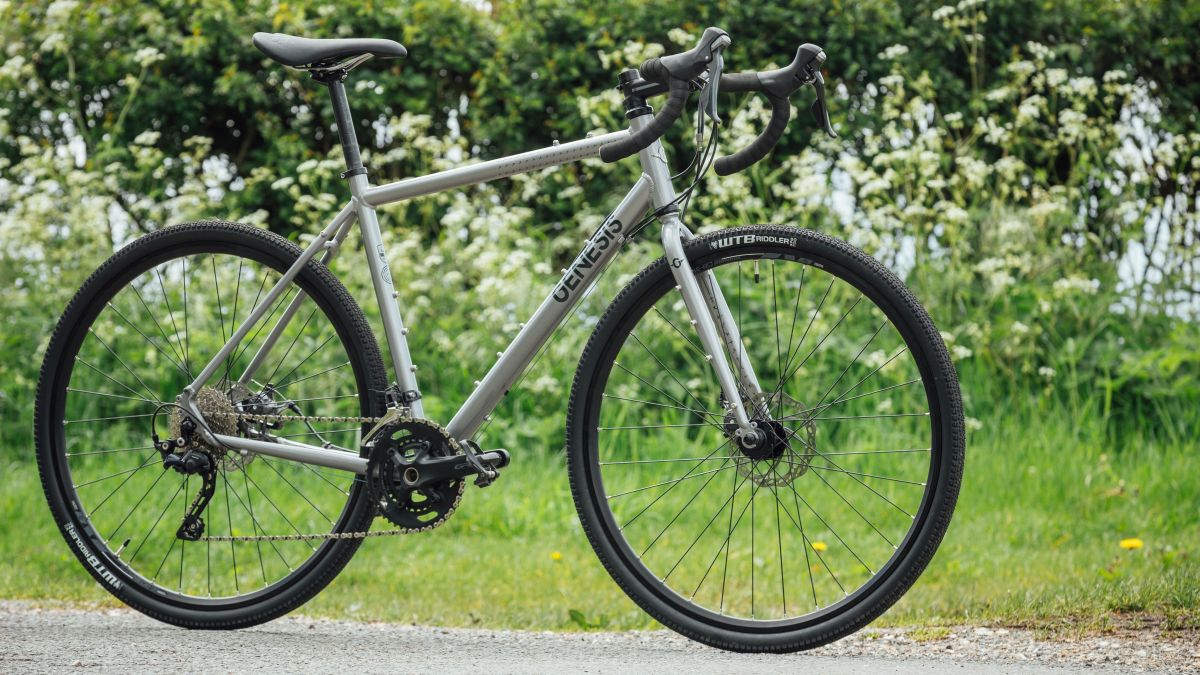 
The Genesis CDA is the aluminum version of the British brand’s steel Iron Cross, the bike that Vin Cox rode for the round-the-world record in 2020.

Genesis says it’s suitable for commuting, utility, touring, road and gravel. “Beaten on B-roads, bridleways, back roads and everything in between, CDA will tackle it with a smile,” the description says, and I will say right off the bat that it is an accurate description.

We tested the Genesis CDA 30 alongside three other bikes priced at £ 1,000 – the Boardman SLR 8.9, the Giant Contend AR 4 and another forthcoming model. Each bike has been tested with the specified tires and a pair of Schwalbe Pro One control tires.

TIG-welded aluminum frames are rarely pretty, but the CDA is more of a workhorse than a work of art. However, it has a pleasantly traditional silhouette with the double butted 6066/6061 round profile tubing.

The fork itself is made of steel. It looks indestructible, and it probably needs to be: it’s dotted with rack mounts and looks ready for some serious transport.

Another striking feature of this bike is the Hellraiser type brackets protruding from each tube. I counted 24 in total, meaning you could probably load it up with Sainsbury’s and Millets content on your run around the world if you didn’t want to risk the local hospitality. There are fender eyes on the front and rear.

The Genesis looks slightly dated with its quick-release dropouts rather than thru axles. The fork dropouts are turned slightly forward in order to reduce the force on the QR when braking. However, for a bike that is likely to be used more on-road than off-road, the only problem is whether you want to upgrade and your choice is limited.

With load transport clearly in mind, the geometry is relaxed and stable, with a head angle of 71 ° and a seat angle of 73.5 °. The range and stack are short and tall, respectively, as you might expect. The wheelbase at 1,023mm is longer than a pure road bike but not huge.

There is a huge amount of clearance, however. The WTB Riddler 700x37c gravel tires it comes with don’t come close to the capacity of this frame at all. The 25c check tires looked ridiculously thin.

The play is of course due to the disc brakes – but what these Promax DSK-717 mechanical disc brakes give in play, they take away in stopping power.

The groupset is mostly made up of 10-speed Shimano GRX RX400 – the derailleurs and crankset – with Tiagra shifters.

The RX600 crank’s 46/30 chainrings paired with an 11-34 cassette provide perfect ratios for gravel and biking, and most people won’t need higher or lower gears for standard road riding.

Clearly the wheels are designed for strength rather than speed – two fairly bombproof 32H jobs.

The finishing kit is Genesis’ own. The flared bar is a nice touch for gravel riding – and comfortable for hikes, too.

The armored specification takes its toll on the overall weight, making the Genesis at 10.85kg a bit of a beast. Geometry was always going to have a similar effect. Sprightly is a hackneyed word in bike reviews – rest assured I won’t be using it here.

However, the surprise is that the Genesis feels so sweet. Aluminum’s reputation for hardness still lingers, but there is no sign of it in the CDA’s ride quality. If I was blindfolded I would have said I was driving an old school steel touring school.

Obviously the fork is steel, so it’s going to have something to do with that. The 37mm WTB tires may have played a role as well, but even with the 25mm control tires installed, it still felt like he could roll anything in his path.

The first time I rode the Genesis, I felt like I had to put in a little more effort than usual to keep up with my teammates’ acceleration. However, the next time I rode it solo I was actually quite happy with my average speed after making two climbs on the local main road, especially enjoying the quick and steady descent. Speed ​​on main roads should in theory be CDA’s Achilles heel, but, with the right road tires, the extra weight and touring geometry are virtually irrelevant – it’s perfectly possible to achieve a lower roadie position above the bars.

The CDA does have an Achilles heel though, and that’s the mechanical disc brakes. Even after what should have been a decent break-in period, they were pretty poor.

We evaluated the braking speed of the four test bikes, with a rider accelerating to 30 km / h and then measuring the distance traveled to stop. The Genesis was fourth out of four, at 4.73 meters compared to 4.2 meters for the (rim brake) Boardman SLR 8.9. Fully loaded with Sainsbury’s and millets on board, I would definitely need a longer tape measure.

To be fair, better pads than the stock ones could improve it a bit, but those brakes would still be a far cry from the level of hydraulic disc brakes – which are appallingly specified on mountain bikes at this price point – and it has to be. sorry situation when the rim brakes are superior.

The Genesis CDA 30 gives a lot of the bike for £ 999 – and it can do a lot more than the pure road bikes tested. If you’re looking for a more comparable bike for majority gravel, the £ 1,299 Sonder Camino AL Rival 1 gets a better spec with SRAM Rival 1 for an extra £ 300.

The CDA is a jack-of-all-trades type bike and it is true that it does not master terrains or individual disciplines in the same way that the Boardman is of the road at this price point for example, but with a lot of cyclists want their bikes to do a lot more these days, and with the gravel on more people’s riding programs, that might just be the ticket.

Shelf Care: The Library Book by Susan Orlean is a wonderful love letter to libraries, arts news and top stories